Software security scanner market today is now mature enough to have its own jargon, built largely by vendor marketing teams. As such, it’s primarily designed to help you get rid of your infosec budget rather than help you design a reasonable security assurance architecture. This is first part of series that looks at SAST and DAST advantages and limitations.

“Static” in this context means source code, nothing else — no compiled objects, no binaries, no libraries, no running application instances. The simplest SAST scanner is grep, although today I’d use ripgrep. It’s a perfect example of a pattern-based SAST scanner. Want to find all occurences in C code where strcpy is used? Just run rg strcmp and it will recursively scan your code base for all occurences of the function. This how first scanners operated back in 2000’s, and this is how some scanners on the market still work, especially with more esoteric programming languages such as SAP ABAP. This method is however quite blind to the context of the potentially dangerous function call and doesn’t account for any data flow spanning across multiple lines or files of the code.

This is why new generation of scanners was created that actually understands the application’s code and data flow, usually using Abstract Syntax Tree (AST) (AST) but also much more interesting techniques are employed such as code emulators etc. The scanner builds an in-memory model of all the possible application execution flows and then queries it for known vulnerabilities, often with a whole SQL-like query syntax. Scanners I much respect like Checkmarx and Semmle operate this way.

Some SAST scanners operate on source code only, some will scan compiled object files, most likely because it’s easier for them to build AST when the compiler did the initial job of parsing the source code. I know Veracode, HP Fortify and SpotBugs subscribe to this approach.

Most importantly, the purpose of DAST scanner is not to replace proper penetration testing, but rather ensure predictable and frequently repeated testing against known and newly discovered (yes, you need to update the scanner) attacks to catch them early in the development process, and approach sign-off pentest and production deployment with confidence and peace of mind.

The below screenshot serves as a good example of DAST features and limitations at the same time: majority of the issues reported are either false positives or nominal best practice deviations not justifying a “medium risk” classification. 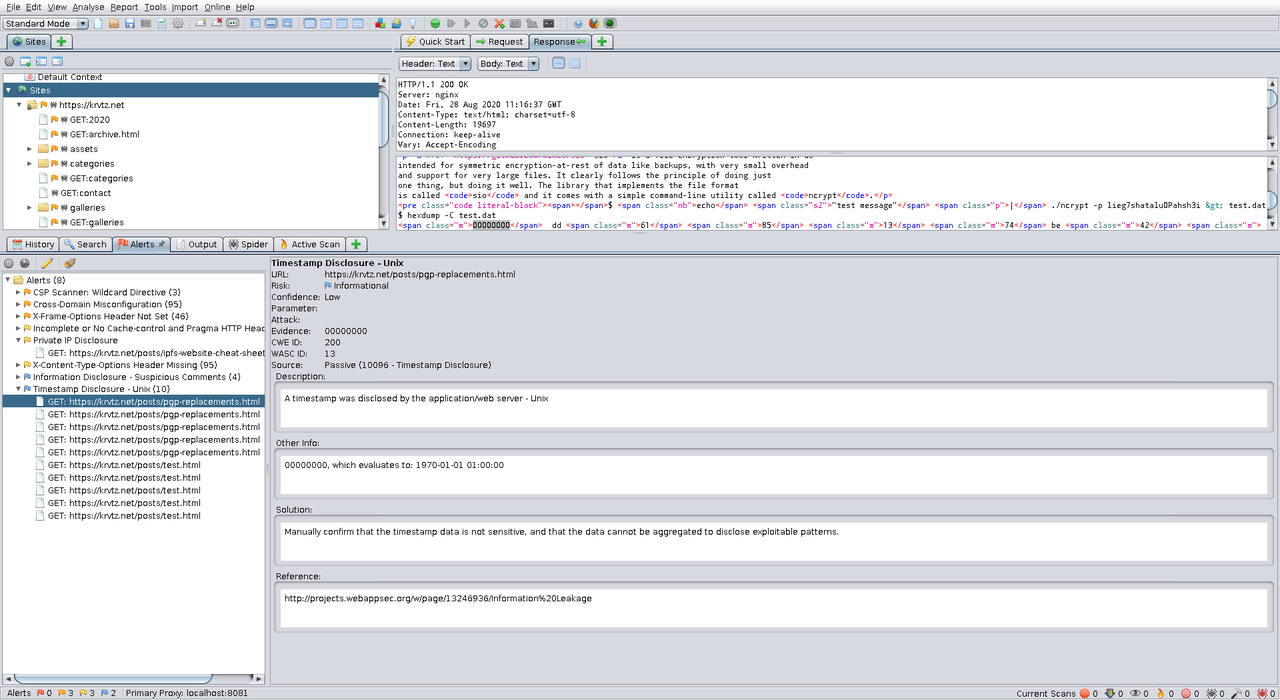 Usually you want to run a DAST scan against your QA/UAT environment as it’s where the scanner can be allowed to unfold the whole battery of truly evil tests. You don’t want these in production instance as they will inevitably pollute your comments with ugly XSS vectors and other test data.

At the same time it does make sense to run DAST scans against production to detect, again, low-hanging fruits left from deployment misconfigurations, vulnerable versions of software or JavaScript libraries.

Oh, and don’t forget both DAST and SAST scanners need to be updated frequently. A scanner last updated in 2010 will not see anything that happened in information security since then and real-world attackers rarely indulge themselves with decade old exploits. They are the first to adopt the bleeding edge techniques.

This part covers the two classic tool groups: SAST and DAST. In the next part I will discuss IAST, dependency checkers and RASP. You might also have a look at the Choosing security scanners for your project article.

Find me on Fediverse, feel free to comment! See how